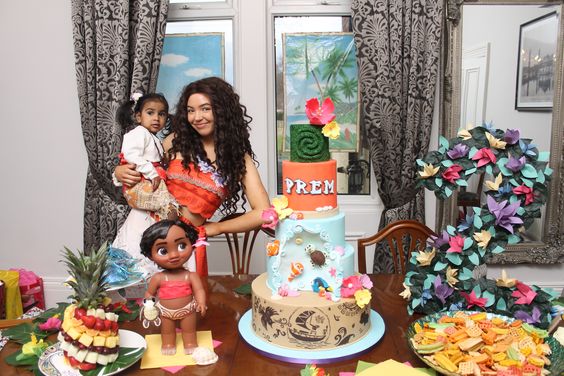 So my little girl turned 2 on New Year’s Eve and we decided to throw her a Moana party. She loves Moana (who doesn’t?) and I liked the idea of a tropical party in December. However about a month before her birthday she also fell in love with Finding Nemo and Finding Dory so I wanted to incorporate them too. I think this was quite lucky though as the themes merged quite nicely.

Anyone who celebrates their birthday or has planned a party between Christmas and New Year probably already knows this but organising events at this time of year is a bit of a nightmare for a few reasons; LOTS of companies close over this period; having items posted and delivered on time is very unlikely; there are so many Christmas and New year’s party’s going on that things like entertainers/venue and caterers are fully booked way in advance; the concept of time and dates seem to get muddled up during the holidays (Maybe that’s just me but all the days just roll into one).

However with a lot of help from Amazon Prime, a few click and collects, lots of online research and a little bit of mad dash running around, we got there and here are a few of the best bits! 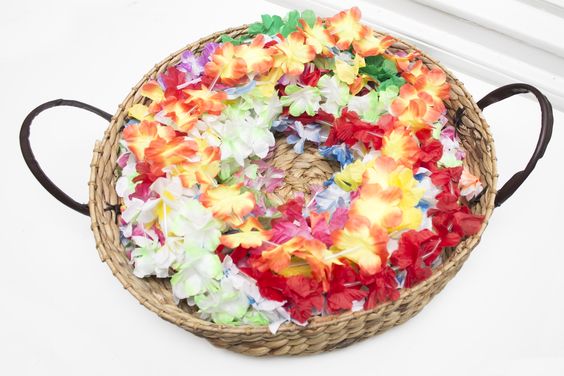 So we thought it would be a nice idea if we greeted all of the guests at the door with a floral garland. 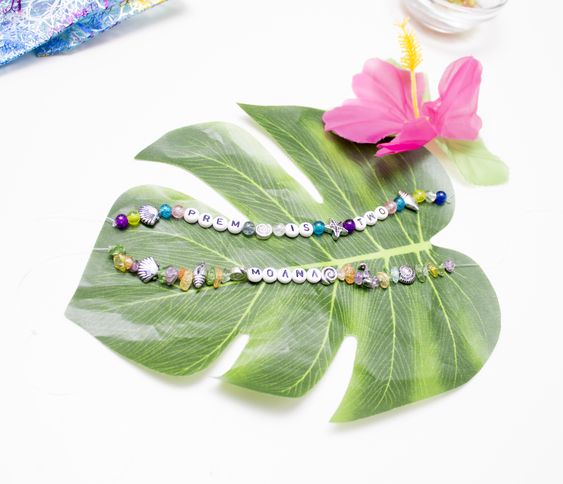 With the party being on the 30th December and our Christmas decorations still up, I really wanted to try and bring a bit of a tropical scene to the party. I bought these hibiscus flowers and leaves from Amazon - 88 pieces for £9.99. They looked pretty all around the house but I really didnt need that many, I'm certain there were options to buy less though. 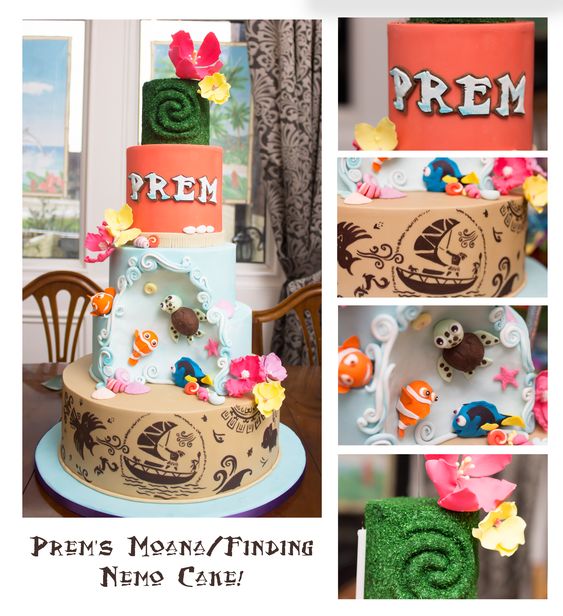 In addition to my little daughter of the chief in her Moana costume, I wanted the cake to be a centre piece. I thought about doing a large canoe or the crab, Tamatoa, but in the end opted for a tiered cake which is what I enjoy the most. I feel is the most effective way to add lots of different designs/colours/textures and flavours and I love having an individual theme for each tier. 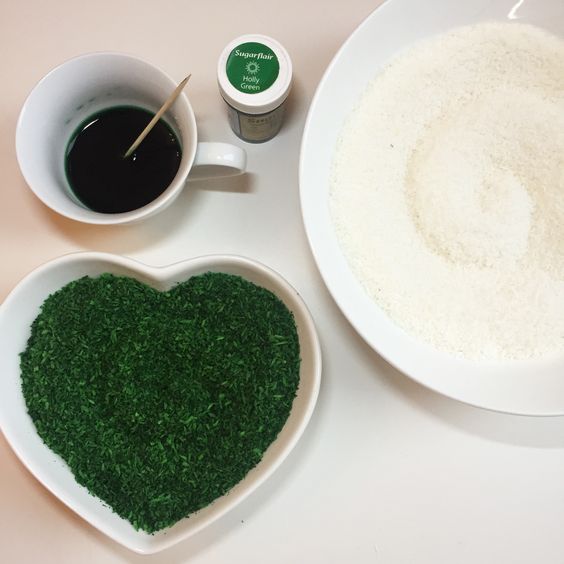 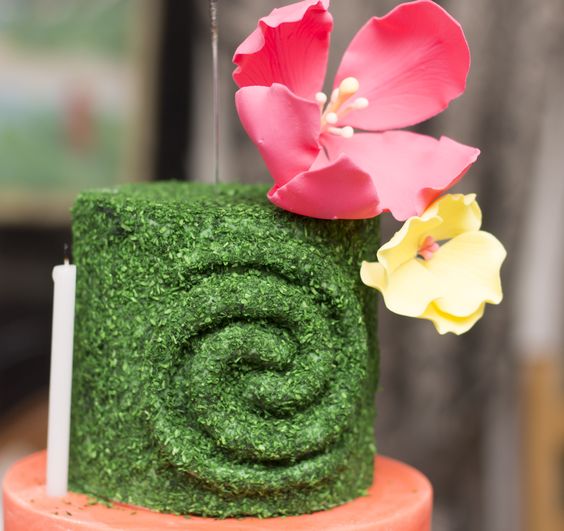 To create the grass textured TeFiti tier I first tried colouring granulated sugar however the moisture very quickly started to melt the sugar and it stared to clump together and look shiny. I then had the idea of desiccated coconut (thankfully I always have this in my baking cupboard for coconut cake) again I mixed the coconut with edible food colouring paste and applied using edible glue. I love how it turned out and it was the tier that seemed to entrigue everyone. 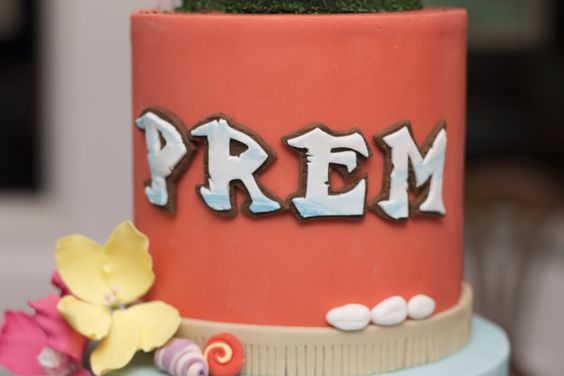 I used the font "Flat Earth Scribe" to get the Moana vibe and marbled the fondant before cutting out the letters for and ocean/surf look. 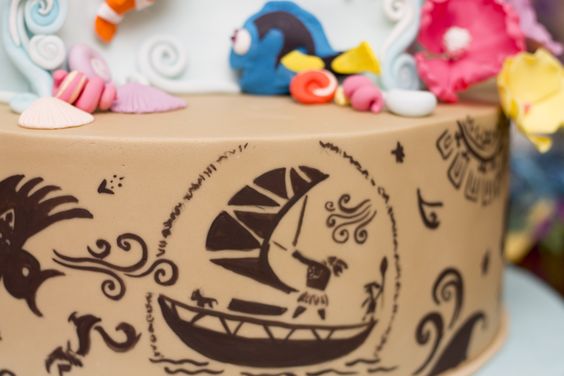 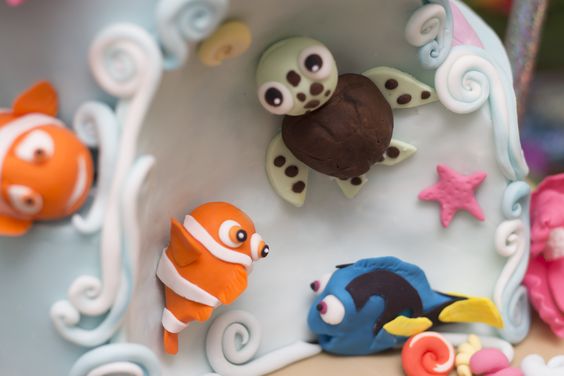 I bought Maui Tatoos and used them for the insperation for the bottom tier  – as I did them free hand they weren’t perfect and I did improvise with lots of the little details but I think the contrast looked great. The hollowed out tiers were dedicated to Finding Nemo and I tried to create the look of the Moana scene where she walks out into the water as a baby.These two tiers were by far Prem's favourite and it was a real effort to protect them from her during the course of the day..

... After the party she she did get up close and personal with her favourtie characters and she may have bitten off a few heads!

We kicked our party off in style with a visit from Moana herself (from Meet my mascot) and she was brilliant! We opted for the 30 minute meet and greet, I was worried that it would not be long enough but for the mix of ages of the children at our party it was the perfect amount of time to chat to all of the kids, take photos and do little bits of singing and dancing. This is the first time I’ve hired a character and I couldn’t have been more impressed, she looked the part, put on a really good Moana accent and was fully in character answering all the kids’ questions and telling little stories about life on Motunui.

A masive thanks to Meet my Mascot - they have a range of characters and I will definitely be using them again. You can find thier facebook page here.

These are the outfits I bought for Prem and Nidhaan.  After worrying that the Maui costume would not arrive as it was late and coming from over seas we decided to try and convince our 5 year old that his power ranger costume would be just as cool, surprisingly he was willing to accept this (I'm not sure how I would have coped!).  Luckily though on the Saturday morning of the party the outfir arrived via the wondeful Royal mail! This was the only Maui outfit I could find that I liked and it looked fab on the day - it's also pjs so he'll get his wear out of it.  Prems was a bit more tricky because I really wanted the official costume from the disney store but the smallest size (age 3 i think) was just far too big.  After reading a few reviews on Ebay for the one above I ordered it in size 2-3 and it fitted perfectly.  As you can see on the pic it also came with a heart of te fiti necklace, paddle and hair clips.  Its not as high quality as the Disney store costume but as it fitted and at less than half the price i think it was well worth it.  https://www.ebay.co.uk/itm/Kids-Boys-Girls-Moana-Cosplay-Children-Maui-T-Shirt-Shorts-Costume-Tee-Cartoon/172978148383?ssPageName=STRK%3AMEBIDX%3AIT&var=471742611859&_trksid=p2057872.m2749.l2649

We decided not to do any party games instead focusing on activities. We did cookie decorating and jewellery making and both doubled up as party favours. Although it took a bit more planning I was happy that I didn’t have to choose prizes or winners or deal with upset children who didn’t win! (normally my own son!) 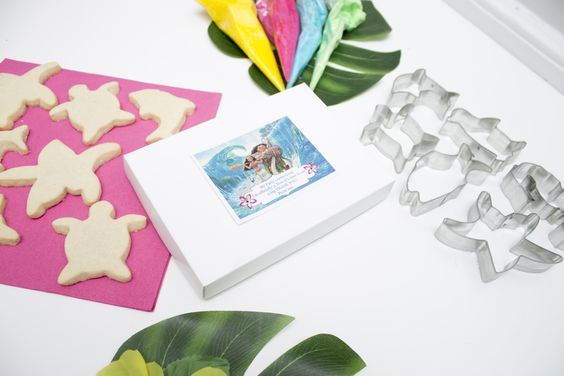 I bought these really cute ocean cookie cutters and baked the cookies a day before. Then I made a batch or royal icing, coloured it with edible food colouring paste and filled celephane piping cones.  The kids and adults really seemed to enjoy this eating some of the cookies as they went along and taking a few home in the boxes we had made up

We hired a soft play and ball pit for our downstairs playroom from Makem bounce – this was amazing and the kids absolutely loved it! The hire time is 10 - 6pm in summer months and 10 - 4 in the winter its normally 10 – 4. We were really lucky though as they didn’t collect until early the next morning so we had hours to play after the party had ended. I would definitely do something like this again as both of my children’s birthdays are in the winter and although indoor play centres are great I don’t enjoy the time restrictions or the food. they had a a variety of soft play items and bouncy castles but I liked the look of these two and the jungle theme kinda fitted.

As I mentioned above both my kids birthdays come not long after Christmas so I struggle to decide on presents when they have already received loads at Christmas and in Prem's case most of her favourite toys actually belong to her big brother. One of her favourite birthday toys though is her Disney store moana Animator doll.  I love the size of this doll and the Chibi style, Its super cute with a little turtle on its wrist and despite it being so big it can stand. They have done a full collection of these and Prem will definitely be getting more in the future. The Pua was a gift from my sister - i think it also came from the disney store. 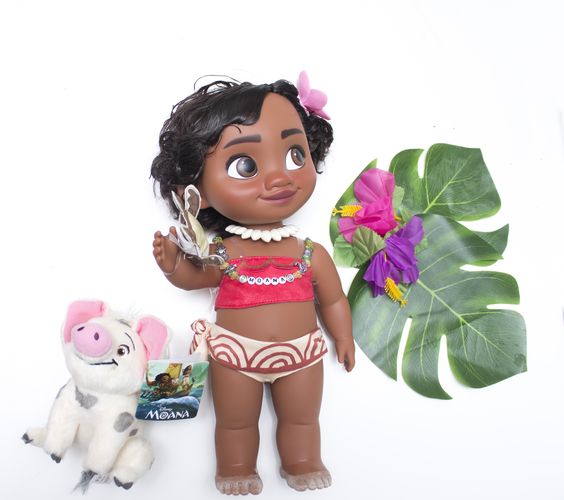 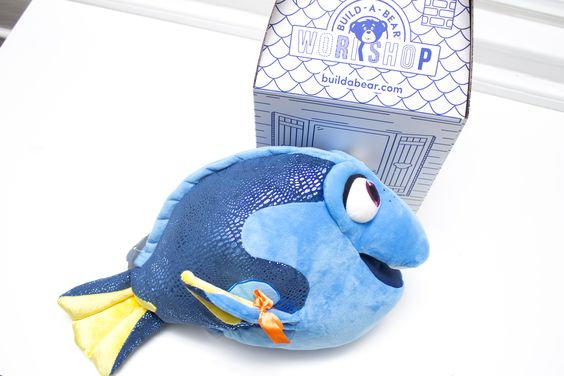 Dory came from Build a Bear and was on sale for £12.50 from £18.  I love that you get a certificate that you can personalise. Shes played with it ever since her birthday and LOVES dory but unfortnatly when we gave it to her on her birthday she basically just looked at it like we had given her a half eaten potato, who knows maybe she was in shock!

One thing that I didn’t buy for Prem was the Moana Lego set as it doesn’t come in a Duplo version but it looks brilliant and my niece who is 7 has it and loves it. I’m think I might buy it for my Son when he turns 5 and if you have an older Moana fan this would be perfect. I think the best price you can get it at the moment is from Argos

So finally the thank you card we printed to go on the cookie boxes - lots of etsy shops do personalised invites/thank you cards and so on but I always like to create my own. We did initially use the flat earth font but after printing it was very difficult to read - anyway I like it and love adding the personal touch. 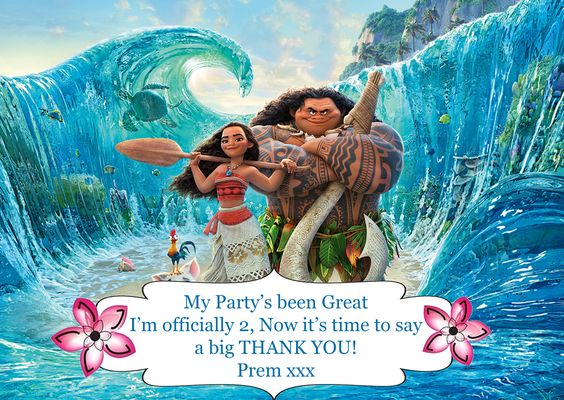 I hope you enjoyed reading about Prem's party and picked up some ideas for your own events! It's taken me a while but I enjoyed writing this as well as finally adding more to my pinterest boards, so hopefully there will be lots more to come. Let me know what you think and if you're after more ideas then pinterest is the place to go. There are so many great ideas to be found and check out my page too, here's the link!